Dr. Masapollo will be giving a virtual presentation at the Florida Chapter of the Acoustical Society of America, entitled, “Dissociation between phonological working memory structures and motor programming units during speech motor sequence learning.”  This project was done in collaboration with Dr. Frank H. Guenther (BU/MIT).

Several existing theoretical models of speech production propose that speakers learn to rapidly produce sequences of independent speech movements by concatenating them into cohesive movement “chunks,” which reduces phonological working memory load and improves motor performance. Currently, however, there is no consensus regarding the operational nature of the chunks for planning and programming speech sequences. To begin to identify these structures, we investigated how performance gains from practicing non-native phoneme sequences generalize to novel sequences that overlap to varying degrees with the practiced sequences. CCVCC words (C=consonant; V=vowel) were constructed using consonant clusters that violated English phonological constraints, thus making them difficult to produce initially. After practicing a subset of the words over two consecutive days, participants were tested on the production of several types of word pairs, including novel words containing unpracticed clusters, practiced cluster words containing consonant clusters that were practiced but in different words from the test words, and fully learned words that were practiced in their entirety. Utterance duration improvements from practicing clusters in one syllabic context fully transferred to novel words that included these clusters, while error rate improvements from practicing clusters in one syllabic context only partially generalized to new syllables utilizing these practiced clusters. Additionally, error rates for the first word in the pair (which depend primarily on motor program structure) showed partial improvements for learned clusters regardless of whether the cluster was practiced in the same part of the syllabic frame (onset or coda), whereas error rates for the second word (which reflect both working memory and motor programming mechanisms) were higher than even novel words if the cluster was practiced in the wrong syllable frame location, presumably due to interference effects in working memory. These results provide support for an onset-nucleus-coda syllabic frame structure in phonological working memory and a syllable-frame-independent representation of common phoneme sub-sequences for motor programs. 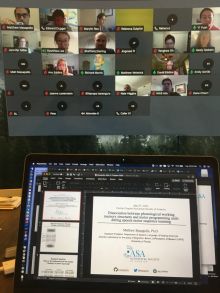