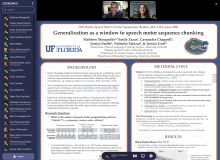 Abstract: Motor chunking facilitates efficient speech sequencing by combining a series of individual articulator movements affiliated with phonological units into a cohesive representation that is more easily held in memory and rapidly executed. Yet the nature and format of these chunk structures has not been fully explicated. The current study used a motor sequence learning paradigm in which the generalization of performance gains from practicing novel phoneme sequences was used to characterize speech motor sequence chunks. Native English speakers intensively practiced producing monosyllabic sequences composed of onset and coda consonant clusters that violated native phonotactic constraints, thus making them unfamiliar. During the motor practice phase of the experiment, which spanned two days, we observed that speakers executed the sequences with increasing accuracy. After learning, speakers were tested on the production of transfer sequences that overlapped with the practiced sequences to varying degrees. We found that performance improvements from practicing sequences with illegal clusters partially generalized to novel sequences that contained those clusters, but only if they occurred in the same syllable location (onset or coda) as the learned clusters. Practicing the whole syllable, however, resulted in even larger performance gains compared to practicing just the clusters or rhymes. Collectively, these findings provide evidence that, during speech motor sequence learning, sequences of articulatory movements are initially segmented into cluster-sized chunks, but that larger syllable-sized chunks override or are formed in addition to these units.