Auditory input is essential to the acquisition and maintenance of speech production skills, and yet speech production has been scarcely studied in children and adults with impoverished auditory input since cochlear implants (CIs) became a standard treatment. A critical piece of the puzzle in understanding the development and maintenance of speech motor control in CI users is that we need to better understand how these individuals time, sequence, and coordinate speech movements. During conversational speech, typical hearing individuals usually produce six to nine syllables per second, using approximately 100 different muscles in their laryngeal and supralaryngeal vocal tract. 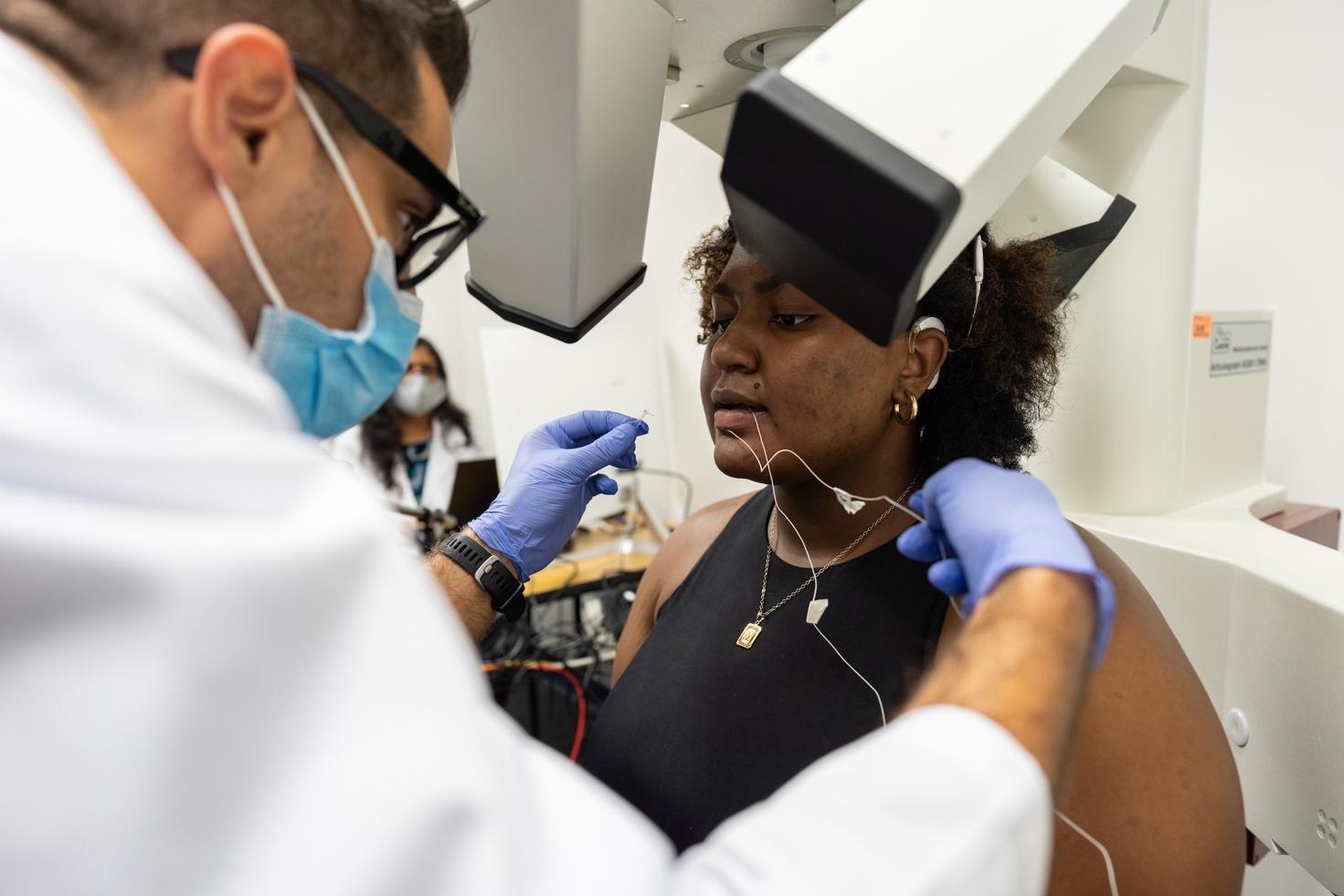 An experimenter fixating articulography sensors onto the lips, tongue, and jaw for speech movement tracking of a cochlear implant (CI) user. Three transmitter coils, located at the vertices of an equilateral triangle above the head of the CI user, generate and radiate out a series of magnetic fields, which track the positions of the sensors in near real-time during a speaking task.

Recent technological advances have greatly improved researchers’ ability to track the motions of the speech articulators (tongue tip, tongue body, lips, and jaw). Our University of Florida Cognition, Action, and Perception of Speech Lab allows the use of electromagnetic articulography (EMA) to directly record speech movements within the inner reaches of the vocal tract on a millisecond-by-millisecond basis, and localize where in the vocal tract the movements occur. The tracking is performed by using magnetic fields to localize the positions of sensors temporarily attached to the articulators during speaking.

However, the use of EMA in children and adults with CIs had been curtailed because it was not clear that direct measures of speech motor actions could be made without negative interactions between CIs and EMA, since both devices make use of magnetic fields. In our current study, published in the Journal of the Acoustical Society of America Express Letters in August 2021, my team and I demonstrated for the first time that there is minimal cross-interference between the devices, suggesting that EMA is a promising method for assessing speech motor skills in children with CIs. Our team is now working to establish optimal methods for collecting articulographic data from CI users.

Collectively, the current findings lay the foundation for future research aimed at developing novel, mechanistically driven rehabilitation protocols to optimize speech motor instruction for deaf children. By combining principles and tools from engineering and computer science with cognitive and linguistic science, we envision developing robotic devices to deliver speechlike patterns of somatosensory input to the vocal tracts of children who use CIs as they learn to listen to speech sounds through their CI processor.